A downloadable game for Windows, macOS, Linux, and Android

Created by Studio Vetea and inspired by Gamopat's Bomb on Pixel City, Bomb on Basic City is an addicting arcade bomber game for the Sega Genesis/Mega Drive.

Papi is back with a vengeance in the new game Bomb on Basic City. Take flight in Papi's bomber to fight the C++ Invasion Forces and reclaim your homeland in this action packed arcade bomber!

Bomb on Basic City has multiple difficulties and unlockable challenges for hours of fun and entertainment. Available now for the Sega Genesis/Mega Drive gaming consoles.

- Buttons: A and C drop normal bombs and missiles ( Power-ups ). B will drop a charged bomb when the power meter is full.

- Start pauses the game and displays the Options menu.

Turns your next bomb into a missile that will reach the ground and cause chaos in its wake.

Raise or lower the plane by pressing up or down.

Defends against one bullet only.

Use on your Genesis/Megadrive Emulator or on your Everdrive cartridge !

Buy the physical Cartrdige version with the Second Dimension Edition :

Get the BOBC Demo here :

In order to download this game you must purchase it at or above the minimum price of 5.00€ EUR. You will get access to the following files: 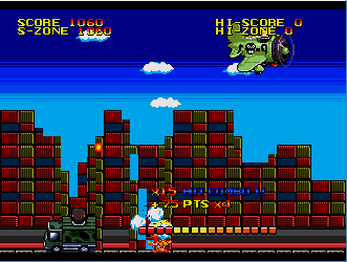 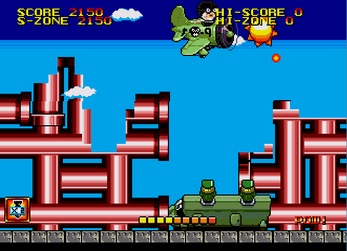